I used to have purpose, to have direction. I was Daddy’s plaything, but more than that, his beacon, his hope, his future. His to mould and to create. The driver behind his lessons. The reason we both worked so hard to be good people, to teach right and wrong to the stupid sheeple.

I still hear his words, from lips that no longer move. Pale and frozen still. I hear them like an echo, an aching reminder of that time. When his words would spur me on, encourage, empower. Always one step ahead, knew each day would bring something new, twisting and turning as he helped make sense of the world. Each lesson recorded in my brain as I grew into a fine woman.

Now it’s too loud, without his filter, it’s too much. There’s too much hate and injustice and violence and I don’t know where I can do the most good. Which lesson do I focus on today, where is the plan, my curriculum for life?

It’s bigger than silly boys that can’t keep their hands to themselves. It’s big grown up boys talking silly words on the telebox; they  don’t even believe the lies they spin anymore, they just want to win, to show each other up, to get out of the trouble they make for themselves with their contradictions. Their lies and their actual germs, a plague amongst the people.

It is far hugerer than individuals that need to be taught a lesson because their bullying ways aren’t kind, and Daddy says we must always be kind, above everything.

It’s entire factions, whole collectives, bound by a uniform, the very people designed to protect who cannot be trusted not to take lives….take them and have it rebadged by yet more bullies to make it justified. They strip away names and rights, I see the wrong words on the headlines that flash up on my screen, “brutality”, “a black man”. They murdered him and he had a name, but not in the media, not in spin city. More of them come, they pour forward their stories and I watch their words and meaning and power stretched and played with like pizza dough, topped with whatever the media needs today.

Lace it with crack, keep them coming back. Find the words that sell and make money, money, always money.

The people are descending into madness, I feel them, I feel them swelling in numbers. I feel their anger and pain, I feel their thrashing, their straining at the leads of decency. Being “decent” citizens, obeying the rules, following the guidelines that increasingly steal our liberties and  freedoms, living in this normal…is literally killing them.

There’s an air of rebellion. I wonder if once I would’ve been excited? To watch the world burn, to see so many trying to teach our lessons and doing it with powerful statements, with fire and noise, so much noise. If I would’ve wanted to march with them?

Instead, confused and drenched, sodden with mis-information and mis-direction I feel myself descending too. The cat tells me all the best people are mad, I like being best people but this is awfully head-achy.

Is there music playing, or the sound of the cistern?

Did I smash the porcelain over his head or was it like that when I arrived?

Did he jump or did I push him?

It’s so hard to tell whether people want to be dead or alive anymore. Fear of death is so vulgarly common, it hardly has the same impact. The death roll rises every day, unreal, like numbers in a computer game. It barely registers on their faces. I feel it in myself and it haunts me, it physically hurts. Each individual that was sacrificed for a lesson meant something, what do these tens of thousands mean? The ones that don’t have enough coffins, that are packed into freezer trucks, with no one attending their funeral, zooming in via a screen, not even present. If they can go that easily then what was even the point of them?

They’d be no good to me. Would they even beg for their life if I threatened to take it?

Why did I come here, when the directive was clear to stay home, or was it? Am I allowed out? This is definitely closer than 2 meters, that’s nearly a whole Daddy and I’m yet sitting on his lap. Brains smushed all over my best pajamas. Although these  are now my every day pajamas, on account of every day being the same. If he has the plague, do you think I’ll get it too?

I lick him for good measure, might as well embrace the inevitable.

Maybe the plague is for the best. Maybe that way we’ll all learn? Maybe when enough people have died, either through the virus in the humans or the virus that IS the humans on this earth….maybe then people will see what’s important.

Maybe it will be quieter, and easier to be kind.

Because we must always be kind, above all else. 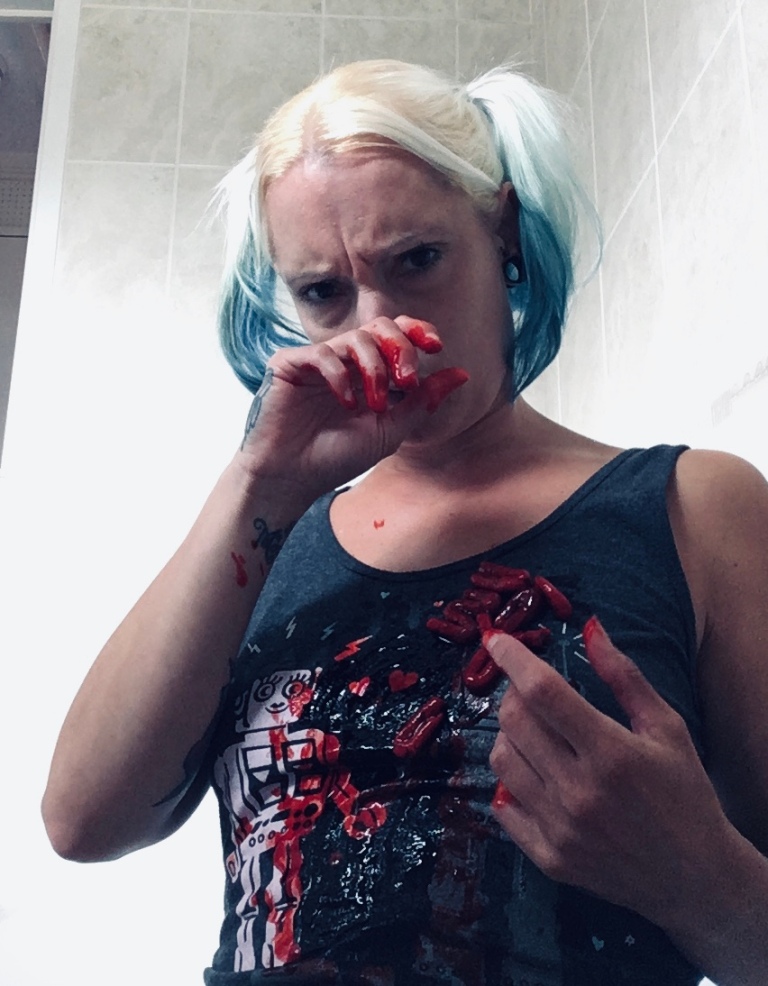 The sharp end of the Blade